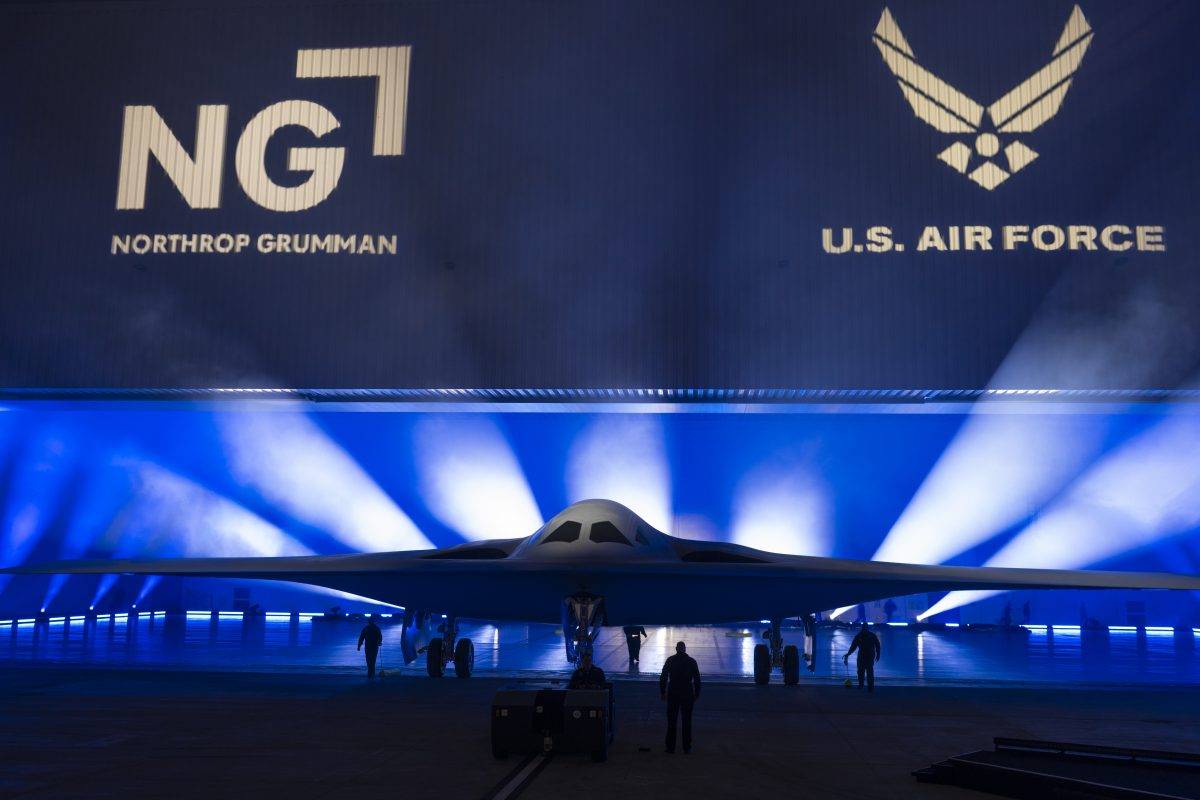 The US Air Force (USAF) and Northrop Grumman unveiled the Northrop Grumman B-21 Raider stealth bomber on December 2 at the company’s factory at Air Force Plant 42 in Palmdale, California. The Raider is the first new American bomber aircraft in more than 30 years and it should enter operational service by the end of the decade.

The ceremony took place in the darkness during the night and under strict security measures. Invited guests were forbidden to bring their smartphones and photo equipment or any other means capable of audio-visual recording. The clear intention was to avoid the risk of a repeat of the well-known case when Aviation Week magazine editors managed to obtain aerial images of a B-2 bomber during its unveiling ceremony from a rented Cessna-172.

On November 29, 2022, Northrop Grumman released several characteristics of the B-21, including Sixth Generation, Stealth, (future) Backbone of the Fleet, Digital Bomber, Cloud Technology, Open Architecture, A National Team (“nationwide participation”), Sustainment, Global Reach and finally the name Rider refers to the famous Doolittle Raid, which was an air raid on April 18, 1942, by the United States on the Japanese capital Tokyo by 80 airmen, led by Lt. Col. James “Jimmy” Doolittle, and 16 B-25 Mitchell medium bombers which as Northrop Grumman refers “set off on a mission that changed the course of World War II”.

The tactical-technical data of the plane remained classified. We do not know the exact ferry range or combat radius, dimensions, weight, etc. However, a reduction in RCS compared to the B-2 can be inferred. This is due to the higher use of composites and the production of parts from large assemblies, as well as the use of the “single W” concept, which further enhances the so-called “all aspects stealth” – i.e. the difficulty of the detection from any side or angle. Also the “beak” is gone and the aircraft is designed with L.O. optimization.

Conceptually, it is partly reminiscent of some earlier programs, most notably Hal Markarian’s later designs for the 1979 Senior Ice bomber and Northrop’s program internally referred to as the N-14. The influence of the Tacit Blue program can also be visible, as well as the X-47B. The Senior Ice program also envisioned the injection of chlorosulfonic acid into the exhaust to achieve a nearly invisible condensation trail. From this perspective, it would be interesting, to say the least, to assume that similar elements of low-observable technology may have been implemented in the B-21, thus Northrop Grumman is explicit about the difficulty to detect the aircraft in the infrared spectrum as well. Unlike the B-2, which is painted dark-grey “low observable” paint scheme to optimize optical visibility for high-altitude flight (the aircraft also has an optical sensor that provides data for flight level optimization), the B-21 is painted light-grey (?), suggesting the use for daytime missions. In practice, although the B-2 was mainly used at night, its primary strategic designation also envisaged flight at an altitude of around 15km. In contrast, the very light-grey paint of the B-21 indicates an intended operational use at much lower flight altitudes for penetration of enemy airspace (China, Russia) and under all conditions.

In terms of operational use, it appears that penetration of enemy airspace will be possible at a (theoretical) approach level of ~140km to the target when considering a roughly ten times lower effective radar reflectivity surface (RCS) compared to the B-2. This does not necessarily imply the ability to target and destroy the aircraft, but to detect its movement in the airspace, and from this perspective, a key future question will be the capability to support and protect bombing missions. This is also why it seems that the bomber will be used at lower altitudes and at all times, due to the concept of using the F-35 and its limited range, before this gap is bridged by the NGAD (New Generation Air Dominance) program, which is intended to prospectively replace the F-22 Raptor. The B-21 will thus serve a dual purpose. It will be used both as a deterrence tool with global reach and also as a tool of conventional precise strikes power projection. The announcement of a significant increase in production of the JASSM/LRASM, which the aircraft will carry, might be interesting from this point of view.

The B-21 will become the main delivery platform for the LRSO missile (AGM-181 Long Range Standoff Weapon). It is not yet clear what operational integration and deployment with the B-52 (which will be the missile’s second delivery platform) will look like.

The deployment of the B-52, B-1, and B-2 to so-called “Integrated Bomber Operations” from Anderson Air Force Base, Guam, in 2016, the first time all three Air Force Global Strike Command (AFGSC) strategic bombers were deployed together in an integrated operation in the U.S. Pacific Command area of operations (AOR), which is also the priority deployment of the B-21 in the future, can provide a theoretical basis for studying the future integration of strategic bombers into the broader military planning.

According to a Congressional study, assuming the New Start treaty expires (de facto it has), the US spends about $40m a year on one B-21 bomber and ten LRSO missiles. Based on these estimates and some other statements, the US plans to produce approximately 145 (maximum 220) B-21 bombers (which also provide some basic estimations about future operational deployment and military planning).

Importance and the future role, conclusions

The B-21 will become a core element of both strategic nuclear and conventional deterrence. Five more prototypes are currently in production, developed with the assistance of “digital engineering”, which has made it possible to skip the phase of demonstrators, and these aircraft are to be entered into the USAF after the test phase, just like the production-standard bombers. In light of the last DoD annual Report on Military and Security Developments Involving the People’s Republic of China, particularly in the field of the horizontal and vertical proliferation of nuclear weapons and technologies, the new strategic priority would be a horizontal deployment of strategic bombers and a further shift toward investment in sustaining a global deployment capability as well as the ability to penetrate Chinese A2/AD systems.

Currently, this is probably the most advanced stealth technology in the world so far. Given the physical limits of stealth technology, the key features the sixth generation B-21 will possess beyond stealth technology are moving into the realm of interoperability, open architecture, and cooperation and integration of other elements of the forces on the battlefield to achieve and secure air dominance.