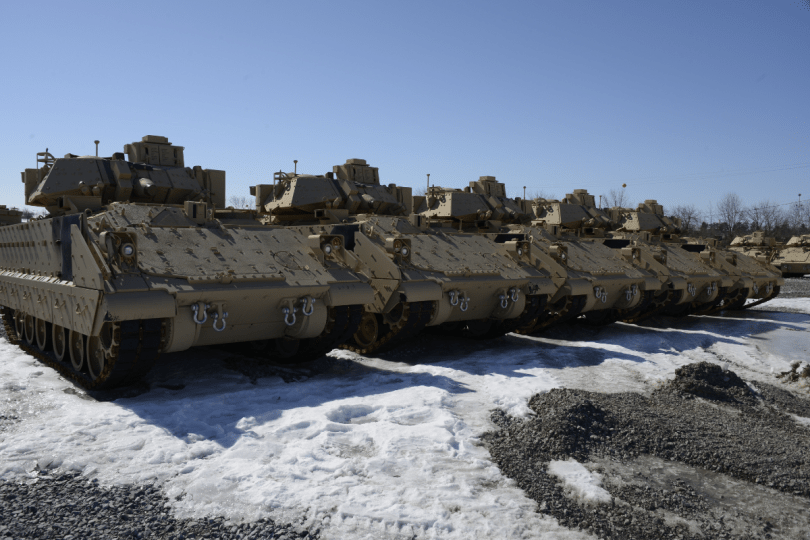 The US will supply M2/M3 Bradley heavy infantry fighting vehicles (IFVs) to Ukraine. Air Force Brigadier General Pat Ryder, US Department of Defense Press Secretary, confirmed it at the press conference, where he mentioned that the new military aid package would include the abovementioned vehicles. The M2/M3 Bradley IFVs, he said, “In terms of what the Bradleys bring, it is obviously an armored capability that can transport mechanized infantry into battle in support of both offensive and defensive operations, providing a level of firepower and armor that will bring advantages on the battlefield as Ukraine continues to defend their homeland” and it can “change the balance on the battlefield”. The delivery of modern IFVs represents a significant qualitative shift in military aid and signals a continued willingness to support Ukraine militarily as well as a belief in the value of such assistance.

The M2 Bradleys will be part of a newly announced $3.75 billion military assistance package, consisting of $2.85 billion in total military aid and nearly $1 billion in additional foreign military financing. An additional $682 million will go to the CEE States Financing Support Program for the purchase of weapons and military equipment.

The announced deliveries of the IFV M2 Bradley (and also the M3 variant for armed reconnaissance) are crucial for several reasons. First, it will help Ukraine to replace the losses of its Soviet-era IFVs. At the same time, for conducting offensive (and defensive) combat operations, it is necessary to have a capability that provides a relatively high level of combination of firepower and protection as well as mobility, which the Bradley has. Last but not least, the delivery of the M2 Bradley represents a certain psychological and political threshold in future deliveries and military support for Ukraine.

Ukraine has Soviet-built IFVs BMP-1 to 3. Compared to that, M2/M3 Bradley, the M2/M3 Bradley represents a qualitative shift. The only disadvantage is the vehicle’s relatively high ground clearance; on the other hand, the M2 is clearly superior in firepower (M242 25mm automatic cannon and TOW ATGM system) as well as in its ability to maintain situational and combat awareness. The M2/M3 is also immeasurably more resistant than all types of Russian IFVs – “in any case, the 25mm calibre sub-calibre ammunition will reliably overcome the frontal armour of all Russian BVVs, whether wheeled or tracked. On the other hand, Bradley frontal armour (M2A2) can withstand Russian 30 mm calibre sub-calibre ammunition.”

As part of the same military assistance package, the United States will also provide Ukraine with an advanced IFADTS artillery fire control system as well as a land-fired version of the RIM-7 Sea Sparrow radar-guided missile. Ukraine has already announced that it has been able to modify the launch platforms of the Buk systems for use with the RIM-7 missiles.

The new military aid package announcement came after France had announced it would supply Ukraine with AMX-10RC wheeled combat vehicles equipped with the 105/47 F2 MECA medium-pressure gun of 105 mm calibre. Germany also announced that it would send a battery of Patriot air defence systems to Ukraine and deliver some 40 older Marder-type heavy IFVs.

The announced military aid has the potential to pave the way for further deliveries of heavy equipment, including tanks, and also shows that Ukraine’s Western allies are serious about their support and intend to continue it. Investment in defence using newer, more lethal and advanced technologies represents a form of political commitment. Ukraine is thus receiving not only military equipment but also its servicing and supply of ammunition.

For future offensive operations, combined arms capability will be necessary. The combination of heavy Western IFVs with old soviet types Ukrainian tanks may represent a critical capability that will enable Ukraine to continue waging war.